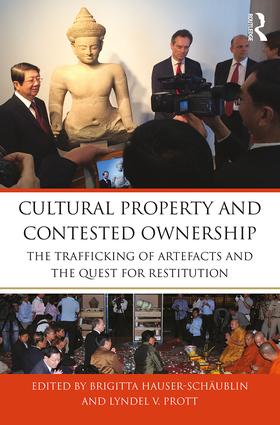 Against the backdrop of international conventions and their implementation, Cultural Property and Contested Ownership explores how highly-valued cultural goods are traded and negotiated among diverging parties and their interests. Cultural artefacts, such as those kept and trafficked between art dealers, private collectors and museums, have become increasingly localized in a ‘Bermuda triangle’ of colonialism, looting and the black market, with their re-emergence resulting in disputes of ownership and claims for return. This interdisciplinary volume provides the first book-length investigation of the changing behaviours resulting from the effect of the 1970 UNESCO Convention on the Means of Prohibiting and Preventing the Illicit Import, Export and Transfer of Ownership of Cultural Property. The collection considers the impact of the Convention on the way antiquity dealers, museums and auction houses, as well as nation states and local communities, address issues of provenance, contested ownership, and the trafficking of cultural property. The book contains a range of contributions from anthropologists, lawyers, historians and archaeologists. Individual cases are examined from a bottom-up perspective and assessed from the viewpoint of international law in the Epilogue. Each section is contextualised by an introductory chapter from the editors.